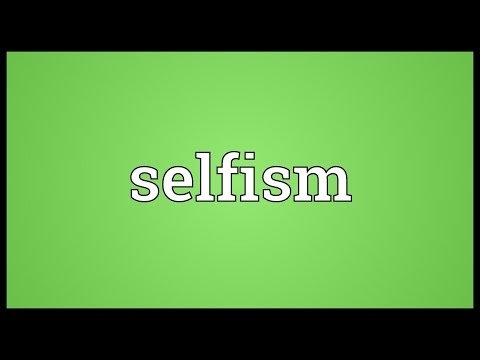 Definition of the noun Selfism

What does Selfism mean as a name of something?

Selfism refers to any philosophy, doctrine, or tendency that upholds explicitly selfish principles as being desirable. It is usually used pejoratively.

Printed dictionaries and other books with definitions for Selfism

Selfism is a pardonable hallucination, but its penalties are unremittable. Israel had to bear them, and, though it mourned over them, they were good for it. Much that was of spiritual benefit to Israel came out of its faith in its selection. Its integrity ...

Selfism is a pardonable hallucination, but its penalties are unremittable. Israel had to ...

The American Phonetic Dictionary of the English Language (1855)

Selfism. Generalized problem-solving expectancy that successful resolution of problems will best occur by thinking of oneself first. Self-love. 1. Excessive self- regard; a narcissistic attitude toward one's own body, ability, or conduct. 2. Mature ...

— n selfism concentration upon self; the selfish theory of morals, that people act from the consideration of what will give them the most pleasure. — n self 1st. — *;t// selfless having no regard to self, altruistic. — n selflessness.

The Century Dictionary and Cyclopedia: The Century dictionary ... prepared under the superintendence of William Dwight Whitney (1903)

The Imperial Dictionary of the English Language (1883)

Selfism (self'izm), n. Devotedness to self; selfishness. [Rare.] Selfist (selfist), n. One devoted to self; a selfish person. 'The prompting of generous feeling, or of what the cold selfist calls quixotism." Jer. Taylor. [Rare.] Self-justification (self ...

Online dictionaries and encyclopedias with entries for Selfism

Video shows what selfism means. The practice of focusing concern and effort on the needs of the self.. An ethical system prescribing such focus.. Selfism ...

Couldn't select: You have an error in your SQL syntax; check the manual that corresponds to your MariaDB server version for the right syntax to use near 'selfism"" IN BOOLEAN MODE) LIMIT 1,1' at line 1

The value of this 7-letter word is 12 points, but it's not an accepted word in the Official Scrabble Players Dictionary.