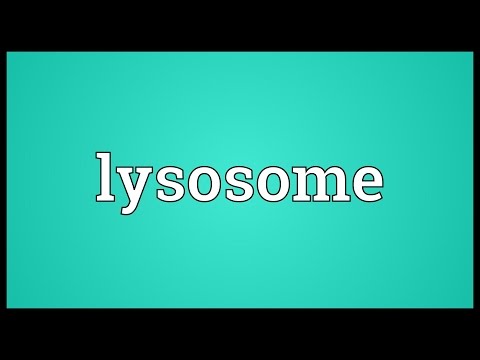 Definition of the noun lysosome

What does lysosome mean as a name of something?

Alternative definition of the noun lysosome

Printed dictionaries and other books with definitions for lysosome

A lysosome is a membrane-bounded particle containing a number of hydrolytic enzymes. It is difficult to describe the typical morphology of this organelle because of the structural heterogeneity of the cytoplasmic bodies. Some morphologists ...

by John A. Barranger, Mario Cabrera-Salazar

The lysosome is the terminal compartment in both the endomembrane and biosynthetic and endocytic pathways, and...

the lysosome is an acidic compartment (which contains a proton pump ATPase); it must be ...

The lysosome is an organelle that houses hydrolytic enzymes used in the digestion of complex food molecules in the cell. 11. 1 Molecule 3 represents a polypeptide (protein) molecule composed of four units of amino acid. Each of the ...

The lysosome is a spherical membrane-bound vesicle containing digestive enzymes that break down large molecules such as fat. The Golgi apparatus is an organelle in the cytoplasm that packages proteins and carbohydrates into vesicles for ...

Introductory Accounts of the Universe and Its Life by G. H. A. Cole

Lysosome is the organelle which carry the digestive enzymes in an eukaryote. Mafic is a measure of the iron and magnesium minerals in a dark coloured igneous rock. Magma is molten rock formed within the Earth. Main sequence contains ...

Surgical Diseases of the Spleen (2012)

Storage Disorders The lysosome is an acidic membranous compartment of the cell containing numerous hydrolases. In part, it is responsible for the degradation of glycoproteins, lipids, etc. that are normally turned over during cellular ...

The lysosome is an organelle that contains a wide array of digestive enzymes. Lysosomes form in a manner analogous to the formation of secretory granules, but lysosomes fuse with endosomes instead of the cell membrane. After fusion has ...

Lysosome (lysis-breaking; some-body) Lysosome is a membrane bound organelle found only in eukaryotic cell that contains hydrolytic enzymes. If the lysosome accidently breaks inside the cell, the enzyme contents will destruct the cell.

A Primer for Couples and Families by Angela Scheuerle

The lysosome is the place in the cell in which dangerous compounds, bacteria, and other material are broken down. Malformation An intrinsic problem of embryonic or fetal development. A malformation is a deviation from normal fetal structure.

A lysosome is an organelle that contains hydrolytic enzymes needed for cellular rebuilding, repair, and degradation. Some lysosome enzymes hydrolyze proteins to amino acids; others hydrolyze polysaccharides to monosaccharides. Bacteria ...

Lysosomal Disorders The lysosome is a storage organelle containing hydrolytic enzymes that has important functions in the phagocytosis of metabolic degradation products. Lysosomal dysfunction is usually caused by a single enzyme ...

The lysosome is a specialized vesicle formed by the Golgi apparatus (Figure 3- 12). It contains powerful enzymes enclosed in a single, protective membrane, which fuses with other vesicles carrying nutrients, microbes or aged cellular parts .

The lysosome is the cell's trash incinerator.

Lysosomes The lysosome is the trash collector of the cell. Bound by a single lipid bilayer, the lysosome is responsible for hydrolytic degradation of obsolete cellular components. Extracellular materials, ingested via endocytosis or phagocytosis ...

from which membrane departs for either the plasma membrane or an endosome, eventually reaching the lysosome. The lysosome is an Early endosome Late endosome reticulum Lysosome Ribosomes Peroxisome Nucleus (SER),.

Thus, the lysosome is the cell's digestive system and acts to recyle intracellular components, such as the cytoskeletal proteins and old organelles (autophagY), as well as to digest extracellular material that is trapped in phagocytic vesicles ...

The lysosome is the principal organelle responsible for the degradation of cellular waste. It is a common constituent of all cell types of ...

Lysosome 291 Lysosome [biomedical, chemical] Organelle in biological cell that has a digestive function. These cellular pockets contain acid hydrolase enzyme that is used to assimilate cellular waste material as well as foreign materials and ...

The Facts on File Dictionary of Biology (2009)

lysosome /lÿ-sŏ-sohm/ An organelle, found in animal cells and certain protists, that contains various hydrolytic enzymes responsible for degrading aged or defective cellular components, or materials taken in by the cell from outside ...

Volume One by Larry R. Squire

lysosome lysergic acid (li-siir'jik, li-) A crystalline alkaloid that is a major constituent of ergot. It is used in medical research to induce hallucinations, delusions, and other symptoms of psychosis. The drug LSD is a derivative of lysergic acid.

A Dictionary of Biomedicine (2010)

lysosome related organelles lyn A nonreceptor tyrosine *kinase of the *src- family that is important in B-cell signalling. lyngbyastatin See DOLASTATINS. Lyon hypothesis The hypothesis, first advanced by Mary Lyon (b.1925), that there is ...

lysosome. n. A membranebound sac inside a cell which has enzymes that can break down cellular components that need to be destroyed. lysozyme.

The Dictionary of Cell and Molecular Biology (2012)

lysosome Membrane-bounded cytoplasmic organelle containing a variety of hydrolytic enzymes that can be released into a phagosome or to the exterior. Release of lysosomal enzymes in a dead cell leads to autolysis (and ...

Online dictionaries and encyclopedias with entries for lysosome

Video shows what lysosome means. An organelle found in all types of animal cells which contains a large range of digestive enzymes capable of splitting most ...

Go to the usage examples of lysosome to see it in context!