Artist appears in the following palindrome (phrase that reads the same backward as forward):

The word artist is considered to be an easy one, according to the Dale-Chall word list, which includes 3000 words that all fourth-grade American students should know and understand.

Definition of the noun artist

What does artist mean as a name of something?

Artist is one of the top 1000 most common nouns in the English language.

Alternative definition of the noun artist

Definition of the adjective artist

What does artist mean as an attribute of a noun?

Artist is a musical group.

Artist is a record label.

Phrases starting with the word Artist:

Phrases ending with the word Artist:

View more phrases with the word Artist in thesaurus!

Printed books with definitions for Artist

But in 'The Builder' we are told that ' the transparent fallacy which underlies the whole series of attacks is that because every true artist is a workman, therefore every workman is a true artist.

The artist is the author of the image on the stone. Rauschenberg in particular has a...

The Artist is the Medium is the Message: A Ron Sukenick Re-Mix Mark Amerika Abstract Expressionism (Part One) Riffing on Sukenick's dictum that "[g]enre is traditional, medium is technological ..." and that "[w]e live in a technological culture, ...

144 Great Films From the Last 25 Years by Christopher Tookey

The Artist is that rarest of phenomena: cinematic perfection. A French picture shot in Hollywood with a largely...

The Artist is a work of genius: witty, sophisticated and blessedly original. It is moving, charming and funny. It's one of the most ...

Online dictionaries and encyclopedias with entries for Artist 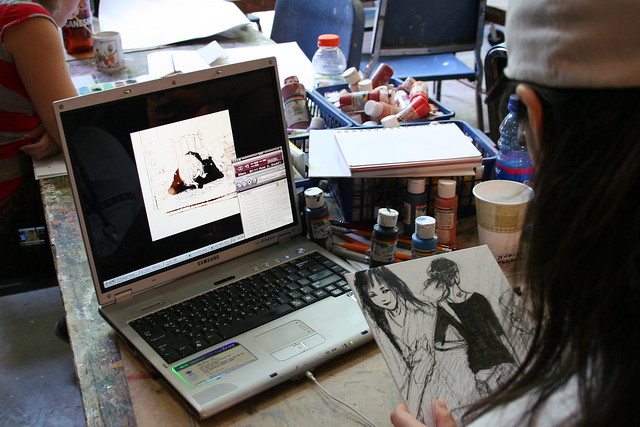 View more pictures about The Artist and Street artist.

The main reason he wanted to be a recording artist was because it gives you much more freedom in your writing. You only have to please the artist and the artist is you so you can be more daring and experimental. (Cynthia Weil)
more quotes about artist...

See also the blanagrams of Artist!

Go to the usage examples of Artist to see it in context!