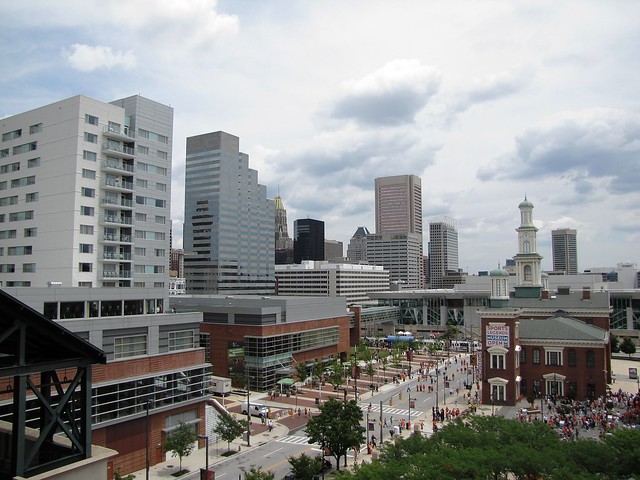 Baltimore appears in the following palindrome (phrase that reads the same backward as forward):

"Baltimore" is a photography (gelatin silver print) by Lee Friedlander, taken in 1968 (48 years ago).

Printed dictionaries and other books with definitions for Baltimore

Stories from Charm City by Daniel A. Nathan

Baltimore is “a salty old broad with harsh edges and ridiculous hairdos,” muses hometown boy rafael Alvarez.10 A bit hyperbolic, but the point is well made and taken. Baltimore is an unpretentious place, unafraid to embrace its quirky side.

Baltimore is a city with many great bars, restaurants, and attractions, but it takes time and effort to find these spots. The city isn't huge, so learning how to get around doesn't take rocket science, but you do need to know where the good spots ...

Baltimore is a place half in and half out of the water. It sits at the western edge of the Chesapeake, at the confluence of the Patapsco River and the Middle Branch of the great bay. Although it is more than fifty miles from the open ocean, the ...

by Chamber of Commerce of Metropolitan Baltimore

LARGEST STOCK IN THE SOUTH BALTIMORE Baltimore is an up-to-date city. That is to say,

A Dictionary of Universal Knowledge

Baltimore is a place of much wealth and social refinement, and is noted as an art- centre. It is the seat of a Roman Catholic archbishop, who has the rank of irimate of the United States, the see bein the oldest in the country. The diocese of ...

Baltimore is a place of much wealth and social refinement, and is noted as an art- centre. It is the seat of a Roman Catholic archbishop, who ranks as the primate of the United States, the see being the oldest in the country. The diocese was ...

Baltimore is a popular city for gays and lesbians to both visit and live in; a generally wellinformed and tolerant population makes for a refreshing lack of unpleasant experiences for LGBT residents and tourists. The grand homes and cultural ...

But Baltimore is a strangely quiet city, even during the normal pedestrian rush hours. Some people did walk by, but they were usually alone, always distracted, and certainly did not stop to talk to us. Still, there was a person, a presence that ...

BALTIMORE ORIOLES (AL) 1954– • 33 Among the notable players who went on to the major leagues from the Elite Giants were future Brooklyn Dodgers Joe Black, Roy Campanella, and Jim Gilliam. BALTIMORE MARYLANDS. The Baltimore ...

Encyclopedia of Media and Propaganda in Wartime America [2 volumes] (2010)

The Baltimore Riots were ...

Mary's Seminary, Baltimore. In this ...

Online dictionaries and encyclopedias with entries for Baltimore

A week or so ago I did a two hour book review in Baltimore Maryland. (Betty Hill)
more quotes about baltimore...

The value of this 9-letter word is 13 points. It is included in the first and second editions of the Official Scrabble Players Dictionary.

See also the blanagrams of Baltimore!

Go to the usage examples of Baltimore to see it in context!